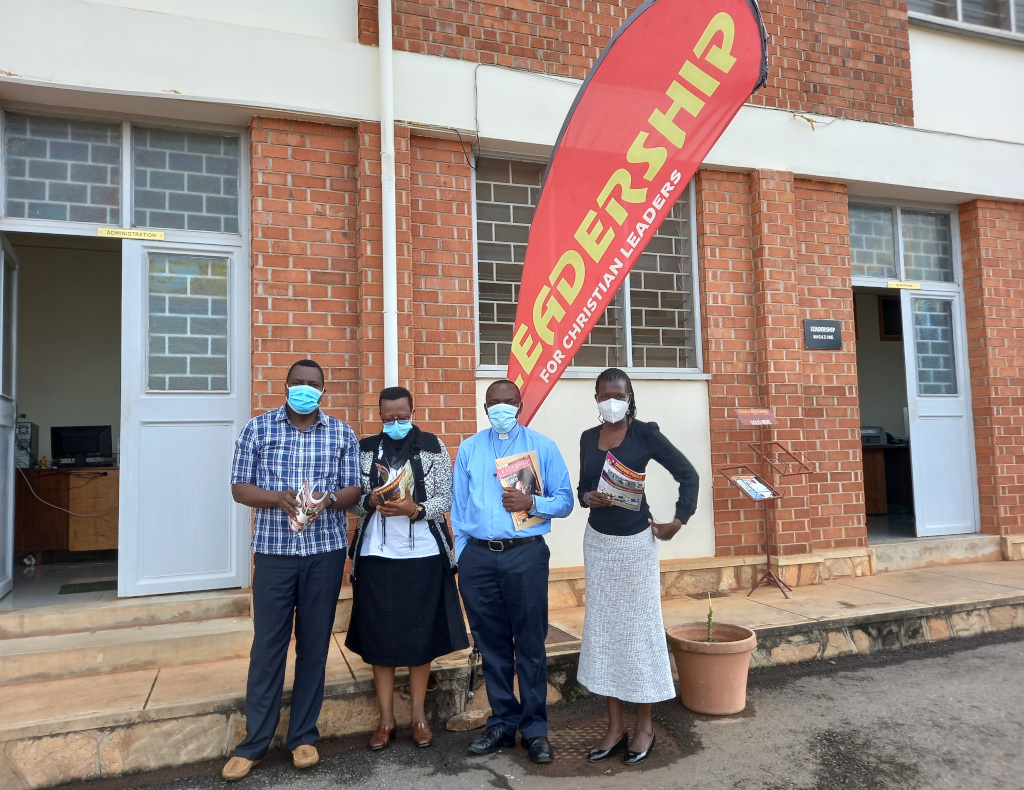 The Lord Jesus has entrusted us with a mission to go into the whole World and proclaim the Good News. In doing this, we ought to appreciate the modern means which we can make use of so that the transformative message of the Gospel may reach all the corners of the world. Whereas our physical presence is needed in mission, we acknowledge the advantage of being connected through the mass media. The appropriate use of the mass media for evangelization facilitates a fruitful encounter between the “Gospel” and “Gossip” in the world. It is an encounter between the Good News and the many fake news meant to manipulate multitudes especially the young ones. The world needs to face the challenge of the Gospel. As missionaries, our mission (work of evangelization) in English Speaking Africa and Mozambique (APDESAM), as in the rest of the world, is facilitated by the media we employ but also gives the content of our communication through sharing our mission experiences.

When sending out His disciples, Jesus cautioned them about the nature of the milieu in which they were going to proclaim the Gospel and be His witnesses. At the time He gave them the disposition they were to have for the same mission: “I am sending you out like sheep among wolves. Therefore be as shrewd as snakes and as innocent as doves.” (Mt 10, 16) This He told them out of His own experience because He is the one who came among His own yet His own did not receive Him (see. John 1, 10-11). The world that never accepted Christ remains up to now hostile to those who believe in Him and propagate the values He lived and died for. The image of the “wolves” that Jesus uses points to the intentional harm inflicted upon the sheep. In such an environment, the question becomes: “How can we advance the kingdom of God effectively without becoming predatory ourselves?” Jesus taught His followers that, to be Christ-like in a godless world, they must combine the wisdom of the serpent with the harmlessness of the dove.

As missionary disciples we go into the world following the example of the Master Himself. In His time, just as in ours, there was and there is a lot to be condemned. All is not right. But in whatever we do as proclaimers of the Good News we ought to remember what drives God to send His son into the world: “For God so loved the world that he gave his one and only Son, that whoever believes in him shall not perish but have eternal life. For God did not send his Son into the world to condemn the world, but to save the world through him” (John 3,16-17). We, thus, have to always keep in mind that our work of evangelization which we carry forward also through the various mass media is meant to heal a wounded world which God fundamentally loves. We are in the world not as competitors, but as witnesses and collaborators with God who is at work to renew everything in Christ.

Signs and chances of the time

Whereas the Pastoral Constitution of Vatican II on the Church in Today’s World: Gaudium et spes (4) used the expression “signs of the time” to refer to those events in history that are characteristic of a time, which, if properly read, can reveal the presence or the absence of God, our use of mass media in evangelization must take a positive consideration of the current usage of the same in the world. We all agree that we are in a time in which people access information by the click of a button. Communication has evolved into an “inter-connected” global reality. What the internet enables people to do and pass over to others is enormous. Here we ought to be as shrewd as the serpents, to grab all the available means of planting the seed of the Gospel everywhere. In his message on the World Communication Day (2021),

Pope Francis encourages us to make appropriate use of the digital technology via the internet: “…we have the opportunity to report what we see, what is taking place before our eyes, and to share it with others.” The Pope reminds us of the hidden dangers of the web and encourages us to be critical and responsible in the use of the modern media:  “…the risk of misinformation being spread on social media has become evident to everyone…Being critical in this regard is not about demonizing the internet, but is rather an incentive to greater discernment and responsibility for contents both sent and received. All of us are responsible for the communications we make, for the information we share, for the control that we can exert over fake news by exposing it.”  We are in a time when everybody seems to be communicating, but the fact is a lot that is being passed on is not true and is not constructive. There is a lot of manipulation of news and images that constantly spread falsehoods. Through our presence on the web we are called to be witnesses of the truth. This is the truth of the Gospel which liberates (see John 8, 32). It is for this purpose that each circumscription in the APDESAM is encouraged to have an active website and social media platforms where experiences are shared and connections to the rest of the congregation and to the world are made possible.

Comboni understood mission places (in his case Africa) to be places of encounter with God who works for the liberation and regeneration of the poorest and most abandoned. He felt compelled to share his experience in the mission experiences. For this reason he used the available media at the time. He wrote very many letters some of which were published in world and church journals.  He, thus, made the plight of the poor Africa known and aroused the interest of the Church and world for Africa (not as an explorer but as an evangelizer). Our use of mass media even if in their traditional printed form serves as a prophetic voice for the many voiceless in the world. Our presence and publications (World Wide, New People, Leadership Magazine, Zikomo etc.) offer a reflected view of the reality of the countries where we share the life of the people. Pope Francis thanked the journalists who, through their curiosity, openness and passion, bring to light situations of hardship in different countries (Message on World Communications Day 2021).

We, on our part, are not journalists, but missionaries, who through our presence in various parts of the world, strive to make common cause with the people and through our publications sensitize the rest of the world on numerous cases of oppression and injustices inflicted on the poor and on the environment, and many wars that otherwise would be overlooked. Pope Francis encourages us to appreciate the privilege of “seeing things first hand“. However much our publications sensitize the world on what happens in the missions, they should not be primarily used for fundraising, otherwise we misuse the experiences of the poor.

The work of evangelization that we are engaged in in our mission and the experience of which we share in any way bear fruits. This corresponds in any a way to what St. Daniel Comboni is believed to have said: “Where the Gospel is planted it transforms hearts.” Our publications awaken the missionary spirit in the Local Churches where we are working and invite many to be part of this Christian adventure. It is not rare to hear from many of our young confreres: “I got to know the Comboni Missionaries through the magazine they run and wanted to know them and their life better. I went to see them and got hooked there.”  This is then to say that our use of mass media is an instrument for the promotion of vocations. We should never be tempted to keep our mission experiences for ourselves.

Challenges in the use of the mass media

Besides the many advantages of the mass media in the work of evangelization, there are many challenges. Our publications are like a drop in the ocean of information. There is a danger that these go unrecognized in this flood of information. This should not discourage us from always starting afresh. Jesus encourages us that the Kingdom of God is like a mustard seed or a leaven containing an enormous potential for transformation (see Mt 13, 31-35). St. Paul (the great missionary who “published” a lot in his letters) encourages us to be prepared to preach (”publish” emphasis is mine) in season and out of season…with great patience…” (See 2 Tim 4, 2). Our contribution can, of course, be a simple reflection without a promise for a miracle for those who share it with a certain number of people!

The poor reading and writing culture affects the use of mass media. This is evidenced by the number of subscribers that we have for the various publications we make. The level of literacy is increasing, but the culture of reading is still below average. On the other hand very few are willing to write. It seems many confreres are so immersed in mission work that they find no time to put down their experiences in writing. The style of writing has enormously changed due to the use of social media that often allow for shorter articles. I think we can also shorten the message in order not to disappear from the media. If we disappear, then we are not relevant.

Lack of sustainability is another challenge especially for printed media work. The circumscriptions find it difficult to guarantee the future of the publications which have up to now been sustained by donations from outside. This needs considerable deliberation with the possibility of merging more publications and sharing the costs among circumscriptions. The alternative would be to do more digital publications, but a great number of people still cannot afford accessing them due to poor connectivity and data costs.

Lack of preparation for the confreres working in mass media. Many a times confreres are asked to take over media work without the minimum preparation. Of course, the good will and self-appropriated skills are important but in order to have a relevant presence in the mass media the quality of the publication matters a lot. This can be improved by giving the confreres some professional preparation in media and journalism. We shouldn’t, however, wait until we are all professional journalists and media experts. We have a chance of working together with lay people who have even more media expertise than us. We should be proud of being “experts of mission“!

Some questions for reflection and sharing

How and for what do I use the media?

How often do I share my mission experience in form of a written article?

How attractive are our publications especially to the youths?

What can we do to make our publications self-sustainable?

The Horizon of Interreligious Encounter: Dialogue and Fraternity

The Path of Mysticism