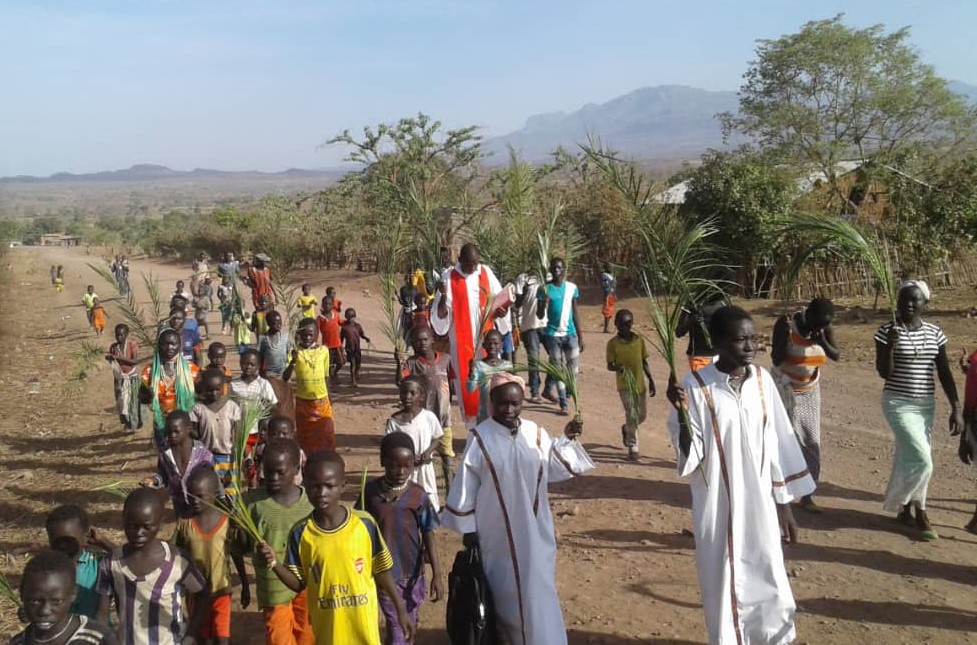 Evangelization is a complex and dynamic reality. We have underlined a few elements which may not give a full account of the mystery of evangelization by the Comboni Family in Ethiopia and among the Gumuz in particular. We may run the risk of impoverishing the concept of evangelization if we do not contemplate the work of the Spirit, protagonist of evangelization, who blows and acts in different realities and always in new ways.

Benishangul- Gumuz Regional State (BGRS) is in the western part of the country bordering with Amhara Region in the north and northeast, Oromia and Gambella regions in the south and southeast, and the Sudan in the west. The regional capital Assosa is about 679 km west of Addis Ababa. Agro-climatically most of the region lies 580 – 2730m above sea level, of which most of the land mass is classified as kola. The region is endowed with huge natural resources, such as forest, agricultural land, and water resources.

Gumuz is one of the ethnic groups in the northwestern part of Ethiopia, with ten clans, each having their own territory. The Gumuz are the only ethinic group whose land of origin, since time immemorial, is Metekel.[i] The Gumuz language belongs to the Nilo-Saharan family.[ii] At the last census, 179,348 Gumuz people were counted in Ethiopia,[iii] and there would also be approx. 40,000 in Sudan.

Our Project of Evangelization has been spelled out in its main facet in various documents of our congregation and provincial gatherings in these recent years.

“As Comboni Missionaries we are convinced that our commitment to the poorest and most abandoned is the most important source of inspiration for efficacious  MA…”.(CA.’09 n. 182).

Our Mccj Ethiopian Provincial Directory no. 3.2 emphasizes our main reason of being missionaries as follows:

Our mission in the Apostolic Vicariate of Hawassa has been and still is our main mission work in Ethiopia. Started in Dec. 1964 with the arrival of the first two Comboni Missionaries, was run by Comboni Bishops up to October 2017 , when a Salesian of Don Bosco took the place of Msgr. Migliorati who had died of cancer in May 2017. The mission was a successful endeavor and now the Comboni can move to other mission territories. It is a mission among “The poorest and most abandoned people” of North- Western Ethiopia. The Gumuz are a People of Nilotic Origin, few in number (about 200.000) but covering a large territory. They were a people at the margins of Ethiopian society for many centuries. Now they have their rights and the control their land. They also have the right  “to know that Christ has also died for them”. The first mission in this territory was started by the Comboni Sisters in MANDURA in 2000.The Comboni Missionaries followed them and opened the community of Gilgel Beles in 2003 and a second one in Gublak in 2011. It is really a territory of FIRST EVANGELIZATION and HUMAN PROMOTION.

Ethiopia is notably a multicultural, multiethnic and multireligious country.  An increasing feeling of ethnicity, favored also by the present political-administrative policy of the country, the federation of States, is spreading in the country.  This calls the Church to foster those Gospel values that motivate communion. It also calls our Christians to create unity, stressing the positive elements, which are common to all groups and cultures.

In this complexity, our Church must play a role of promoting unity and understanding among the people, to be instrument of hope. In order to foster spiritual and human growth, stress must be given to initiatives of Christian-human formation at every level, helping the faithful to deepen their faith, their knowledge of God’s Word and of the teaching of the Catholic Church, its structure and tradition. Comboni missionaries are committed to helping the local Church to become mature and self-reliant. In both missions, we have laid a lot of emphasis and promoting the formation of lay leaders and catechists.

We are committed to contextualize the suggestions of the last General Chapters in our reality (C.A.’09, n.59-66):

For the past two years this point has really tested our missionary maturity. Our missions have been going a lot of security instability. As, missionaries, we opted to remain with the people. In the recent intertribal attacks in and around our mission areas, we have been a great source of encouragement and refuge for our people.

In the new socio-political context of Ethiopia, characterized by fragmentation and prone to ethnicity our presence promotes understanding and reconciliation. “Our presence is meaningful when we are close to marginalized groups or in the frontiers situations” (CA ’15 No. 45.2). A presence always on the side of the less privileged.  We are called to a deeper commitment in the field of justice and peace and of human rights promotion. The Church’s long standing commitment in the area of human integral development goes hand in hand with the catechetical training on the social doctrine of the Church to promote lay leaders able to contribute and to create a culture of life, peace, justice, sustainable development and respect of creation.

In both of our missionary in this area, the Comboni Family have given a special attention to the human promotion through:

Inculturation of the Gospel is felt as an urgent requirement.We are lacking suffient materials and resourceful personnel toorganise regular  courses of introduction to the gumuz culture and language for newcomers. But we are greatful the first missioanies have done steps along this line. We will continue to cooperate with the local Church in the production of liturgical and catechetical materials, adopting the official government proposed grammar, in order to deepen the encounter of the Gospel with the local cultures (C.A. ’09, n.57.3).

Dialogue will be the basic attitude to be kept within and outside the Christian community. We are challenged to practice it within the Church-Family of God as well as towards other religious beliefs. It must take place at three main levels:

Since September even earlier than this, there have been waves of violence against the “outsider” communities by heavily armed men, suspected to be Gumuz militia. Till recently many thought that the conflict was intertribal since it was mostly aimed towards the ethnic Amharas, Oromos, and Shinashas.

Soon afterwards, we begun hearing reports of the local Gumuz shiftas kidnapping and killing their fellow Gumuz. They were accusing their victims of being supporters of the Ruling party, Prosperity Party. Here then the conflict puts on political face.

We have been following the efforts and progress made by the government if initiating dialogue. Once of the challenges it is facing is how to get the rebels of Mankush area (Guba Woreda) to the round table. These rebels seem to be launching attacks for different reasons. Some analysts say that some countries are using them to try to bring instability around the dam area thus delaying its construction. This is what we can term as transborder political conflict.

Since the beginning of the month of February 2021, we have so many reports of groups of gangs breaking and looting abandoned people houses in Gublak. So far we had been spared but this was not meant to be for long. On the 30th March 2021, we received the news of the looting of our Parish properties. We visited the Parish on the 26th April 2021. What we saw was heart breaking. All structures were broken into: community house, the Church, Offices, multipurpose hall. We lost very essential properties and documents. We equally have reports of some of our chapels who have been broken into and turned into rebels’ camp as well looting from some of them.

The parish Kindergarten was not spared either. We have lately received reports of the breaking into the St. Jacobis KG school in Gublak town. It seems that many properties of unknown value have been stolen.

Following the advice of the local Bishop and of Comboni Missionaries Provincial Superior, we temporarily pulled out of the parish Gublak on 21st October 2020. Ever since, we have been staying in our nearby Mccj community (50 kms away) and  keeping in touch with the parish catechists and christians communities through different ways. This closeness has brought a lot of consolation for us and closeness to them. We have been keeping regular visits to the parish.

Recently in Gilgel Beles town,a Memorandum of Understanding (MoU) was signed between the Benishangul Gumuz regional state and an unnamed “armed group” which would see members of the later take up leadership positions in the region, acquire urban and rural land, as well as receive credit facilities including for women with a stated goal of solving the security crisis in the region sustainably.

This agreement was signed between the regional government and members of “the armed group” who are taking part in rehabilitation training.

The MoU was signed by Ashadli Hassan, Benishangul Gumuz regional state president, Jegnamaw Mangwa, a representative of the armed group. In order to facilitate the implementation, an interim office is established in Gilgel Beles city, the capital of Metekel zone in the region with three members of the armed group.

Evangelization is a complex and dynamic reality. We have underlined a few elements which may not give a full account of the mystery of evangelization by the Comboni Family in Ethiopia and among the Gumuz in particular. We may run the risk of impoverishing the concept of evangelization if we do not contemplate the work of the Spirit, protagonist of evangelization, who blows and acts in different realities and always in new ways.

Therefore, the main activity of the evangelizer remains prayer in contemplation of God’s work. This will help to discern how the Lord wants him to be a missionary, what range of actions and to whom He sent him to be His witness by announcing the Gospel with all his strength and love. It is the Spirit that puts in our heart the same feelings of St. Paul “preaching the Gospel gives me nothing to boast of, for I am under compulsion, and I should be in trouble if I failed to do it” (1Cor.9:16). It is the strength of the Spirit that guided Comboni to say “Indeed, it would be easy and sweet to sacrifice my blood and my life to co-operate in the accomplishment of this holy work …” (Comboni to Mazza 23-01-1861).

“Put out into the deep… -Peter and his first companion trusted God’s work-, and cast the nets” (Lk. 5:4-6): These words ring out for us today, and invite us to remember the past with gratitude, to live the present with enthusiasm and to look forward to the future with confidence.  Jesus is the same yesterday and today and forever” (Novo Millennio Ineunte). Our wok and commitment, our journey and research of new ways of evangelization continue. May God guide us and bless us!

The Horizon of Interreligious Encounter: Dialogue and Fraternity

The Path of Mysticism